Lightweight gear tends to be pretty expensive and that's why I've made some of my own gear.
But, I keep looking around for less expensive replacements for what I have as my gear gets tattered and worn. GoLite has it's Jam Packs available now. The 50L weighs 30oz. and costs $132 - in case you're looking for a lightweight pack.
They've also got their down jackets and raingear on sale. It's still going to cost some $$$, but you might want to take a look at GoLite.com. I've purchased one of their down coats and an umbrella for my hikes this year and have gotten lots of use out of them. My first University of Scouting experience last weekend was great fun. I was asked to present a talk about Lightening the Load of Scout Treks since I've done a couple long-distance hikes now and am a total proponent of lightweight efforts.
I spent my morning attending the mandatory Unit Commissioner class (yawn) and then listened in on Backpacking 101 and a Preparing for Philmont presentations which were very interesting. I wanted to make sure my end-of-the-day talks did not contradict what those presenters said too badly. :-)

My big, old pack full of 'normal' gear was opposed to my new, lighter pack full of lighter gear. For the most part, people are interested in the gear of going lightweight, but that really is just the simple part. We also discussed:

I've developed my own definition of Lightweight Backpacking:
Minimize the resources required for a successful outing by increasing resource efficiency and outdoors skills.

Resources include equipment, clothing, food, and water that you take into the wild. If you just buy the smallest, lightest, highest quality gear items you can waste a ton of money for a very small weight reduction. Taking a wider view of Lightweight means you are preparing and becoming well-skilled so you can make better use of what you take. I've been asked by a few local troops to come and talk to their scouts about this topic. My next talk is tomorrow night and then one in December. Hopefully, I'm helping to make those wilderness treks more fun for young adventurers. If I can save just one youth from a life of overpacking, it's all worth it! :-)

Busy few days for lost hikers in the news. Too often, it's just silly lack of planning and skills that put rescuers in danger to help foolish folks. Many people may not realize that the majority of search and rescue team members are volunteers willing to sacrifice their free time to help others in need. Every time they go out looking for someone needing help, they go out into dangerous conditions and sometimes get injured themselves.

So, hey, BEFORE you go outside, make a plan and tell someone your plan. Check the weather forecast. Take more gear than just a t-shirt and jeans. And, for Pete's sake, take a flashlight!

On Sunday, a lone hiker without a flashlight, near Camden ME, called 911 because it got dark. 10 firefighters searched, found him, and escorted him back to trailhead. story

On Saturday, 25yr old camper walked away alone from friends at campsite in the early morning and became lost on Vancouver Island, BC. Called 911 and SAR folks came looking. Got a ride out with a truck driver. Friends didn't even realize he was missing. story

On Friday, 43yr old hiker without a flashlight started day hike of Horsetail Falls in OR. Wearing jeans, t-shirt, and jacket, it took longer than he expected and he ran out of daylight. Called 911 and searchers found him and escorted him to trailhead. He burned his hat and backpack to stay warm. ?!?! story

A 56yr old Appalachian Trail hiker got stranded when the Sandy storm dumped snow in the Great Smoky Mountains park. Called 911 and two park rangers hiked in. A nine-hour hike through snowdrifts only got them to a shelter four miles from the hiker. Then, a rescue helicoptor found the thru-hiker and airlifted him out. story

So what? Well, tons of people are having weddings tomorrow and other special events. Other than that, not much will happen. But, it's pretty cool to notice that you were alive and kicking on this special date.

Great opportunity to go on a 12-mile hike! 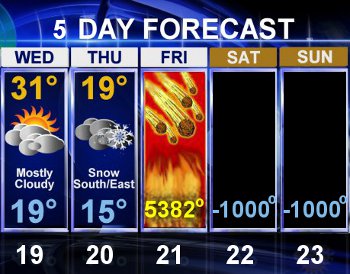 Just checked the weather forecast. Looks like I'd better get a couple good hikes in today and tomorrow. What do fresh snow, mud, and dirt have in common?
They're perfect for finding animal tracks on your next hike!
But, once you've found the tracks, you need to figure out what animal made them. That can be a challenge, especially for people just starting their outdoors adventures.

These Animal Track ID Cards are great for identifying 16 animals you might find on your travels, from the tiny mouse to the huge bear. It's a great resource to print and keep in your pocket for quick reference.

What should you do if a young one asks you, 'Hey, what's that print?'
Hand him the sheet so he can figure it out himself instead of impressing him with your infinite wisdom and simply saying, 'Oh, that's a wolf.' Discovery is the best teacher!

Hike On
(If that link above doesn't work, see the backup.)

Leave Comment
Posted: 02/13/2013
02/18/2013
Swami's Hike
Swami, from Australia, hiked around the USA over the past 18 months - completing the AT, PCT, CDT, AZT, SHT, and some other trails. Just an amazing trip and person.
I met Swami heading southbound on the Arizona Trail while I was heading north. I didn't realize then what sort of wild hike he was on. See his website at TheHikingLife.com.

Here's an Australian news story about his adventure: 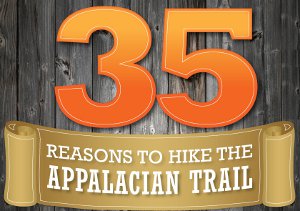 Click the image to view a fun map image of the Appalachian Trail with 35 reasons to hike the trail.

And, here's a few more oddities, tidbits, and fun about the Appalachian Trail:

Can you think of any other reason to hike 2,200 miles?

If that image can't be found see alternate image. 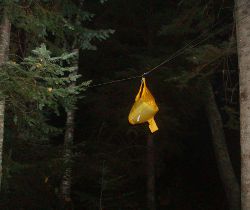 It's not so bad when just car camping, but if your food is lost while deep in the backcountry, you can be in a world of hurt. With a couple days hiking between you and the nearest trailhead, running out of food probably won't kill you, but it's a big step in that direction.
What? How can someone LOSE their food? - you might ask.

On the Arizona Trail, there were often no trees to hang my food. But, bears weren't a concern either. There are wire mesh food bags available that mini-bears can't chew through, like OutSak.

For those times when you need to hang, I've found the PCT Method to be the best if there are large trees around. Along the Superior Hiking Trail, I could often only find smaller trees and came up with my own way of hanging so the food is high enough and away from the tree.

Lift carabiner and food bag as high up the rope as possible and loop rope through carabiner so it doesn't slide.Walk the other end of the rope away from the tree to move the bag out from the tree.

This puts the food bag well over 10 feet up since I can reach up 8 feet. Well, at least I didn't lose any food!

But, here's something new and interesting...
A couple guys at University of Wisconsin in Stout, WI have designed a new product for hanging food bags. It's supposed to be simple to use and secure from pesky food stealers.

They made this video demonstrating how to use it. Unforatunately, there aren't any close-ups of the device or explanation on how it works.
So, take a look and let us all know what you think - innovation or not? 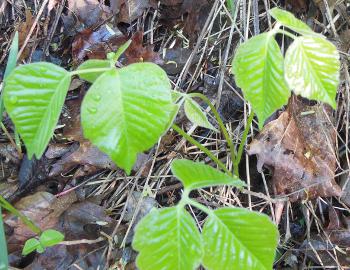 One of the Leave No Trace principles to minimize impact is Travel and Camp on Durable Surfaces. One of the ways to interpret this is to stay on trails when hiking.

As you can see, that is a good idea not only to minimize impact but also to keep safe. I found his little friend of mine along the trail this morning while doing my daily hike. With the three cute little leafs, all shiny and green, he looks harmless enough. No prickly needles or scratchy thorns, but he can cause plenty of trouble if you touch him.

It's the urushiol in the poison ivy that causes skin irritation, more on some people than on others. By staying on the trail, keeping your eyes open, and paying attention to your surroundings, avoiding poison ivy isn't too difficult. When you go off trail, chances of running into it go way up. Actually, just off the trail is one of the best places for poison ivy to grow since it likes wood edges just like the side of a trail, road, or meadow.

It takes only a few minutes after contact with poison ivy for the urushiol to absorb into the skin, but it may take many hours for the itching, rash, and blisters to develop. Immediately washing off the contact area with soap and water is your best bet. Clothes that have contacted poison ivy should also be washed.

Poison Oak and Poison Sumac are also urushiol-producers and cause similar problems as poison ivy.
Burning poison ivy is especially dangerous because inhaling the smoke can effect your lungs.

Hey hiking dude I have several questions planning my first north to south trip from 270 all the way down. I kind a know what to wear what to eat all that important jive. I am in relatively good shape definitely Not concerned about where in tear. 45 years old going with a 21-year-old nephew. My question is I have friends in Duluth that I donât want to burden with driving me whatâs the best way to get up to otter Lake Road thatâs not gonna cost a crap ton. We were thinking 15 miles a day. We were also thinking hammocks. Let me know what you think please. I have read so much and look at so much and heard so many opinions but You seem to be very realistic on your comments. Thank you

@Jason - Hammocks work fine - most campsites have lots of trees.   15MPD is realistic, and you'll probably do more than that many days.
Getting to the northern terminus is expensive (in my mind).  If you can schedule correctly, Arrowhead Transit is cheapest to Grand Marais, but then Harriet Quarles is the only shuttle I know of.  You might find a good ol' boy in Grand Marais willing to drive you the 35 miles to the end for a few $$$.
It's a 3 hour drive from Duluth - that's 6 hours and 300 miles round-trip.  Maybe your friend would like to drive up the north shore for a day.
Ask a Question