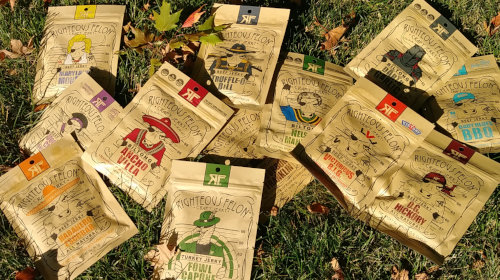 Besides hiking a lot, I brew beer. Homebrewed beer has a lot more character than mass-produced beer, and it's usually unique, flavorful, and powerful. I just discovered that craft jerky is definitely not the same as mass-produced 'jerky', and is more like homebrew - unique and packed with flavor!

TL;DNR - I taste tested this dirty dozen bags of Righteous Felon jerky to see if the product was as good as the hype. Oh, yes! It was a rainbow of flavors, ranging from sweet, sugary, barbeque to eye-sweating chile peppers, with some detours through a plethora of herbs and spices along the way. Just go buy or steal their Righteous Sampler for yourself and get all 12 flavors - use HIKING10 promo code to knock 10% off the price, or off your jail time.

What's This About? - The righteous folks sent me a box of craft jerky to try. They do all their dirty deeds in Pennsylvania, not far from the Eastern PA State Penitentiary if that tells you anything. The claim is that small-batch, craft jerky just murders the big brand, always the same, jerky stuff that you're used to gnawing on. I've eaten plenty of jerky on my long hikes and it's pretty much just a salty snack to chew away on while putting in miles. So, I did a 12-mile hike and 20-mile bike ride this weekend, and took my sack of jerky along. I wanted to see if craft jerky is any different - my oh my, this weekend set me straight! 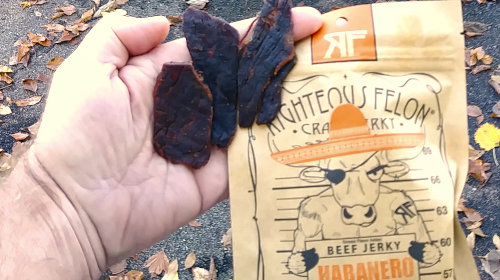 Where's the Beef? - You won't be wondering with this jerky. It's all prime cuts of American Black Angus beef raised outdoors in pastures in Texas and Maryland, and free of antibiotics and growth hormones. A cool thing about this jerky is it's just beef, lots of beef - and no unpronounceable preservatives and chemicals added. And, that means a solid protein source for hiking and other outdoor activities that challenge your body to recover from hours of muscle stress.

It's Just Jerky, Right? - Yeah, no, I thought so, too. The Righteous recipes all have that solid Beef as their main ingredient, but every recipe has its own mix that delivers a unique taste bonanza. I tried the whole dozen and have ranked them in order of my preference below. I noticed a few things about ALL the choices:

But, Didya Like It? - It turns out I kinda prefer hot & spicy jerky, followed by sweet & smoky, with strong herb seasoning bringing up the rear. But, there was only one that I didn't really care for: 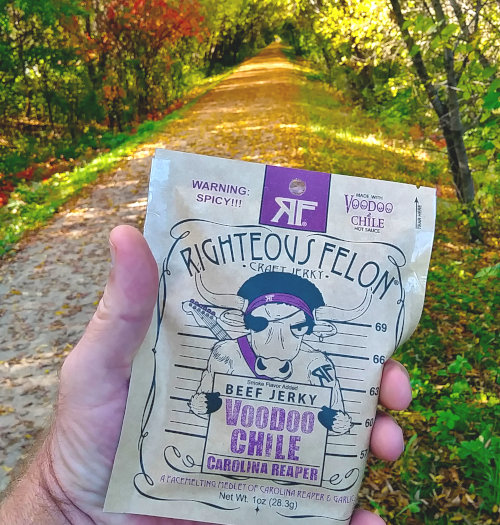 Is This Legit? - You can't really trust a gang called Righteous Felon, can you? So, listen to me instead. After all, I've never been convicted of any felony:

Pssst, Buddy, Down On Your Luck? - Righteous Felon jerky is around $44/lb which is right in the ballpark of other high-end jerkies, certainly not cheap. The mass-produced, monotonous, chemical-laden brands are half that.
If you're looking to save a bit, they have 8 ounce bulk bags of jerky that saves about 14%.
If you're feeling adventurous, they've also got Shredded Jerky Chew which is a hodgepodge of all their jerky bits thrown into a bag. You don't know what flavors you'll get, but it's just $16/lb! Perfect for a hungry hiker wanting a surprise selection of snacks. It's all good.
Finally, the cheapest option is a bag of their meatstick nubs, the ends from their meatsticks. Same good meat and taste, just bite-size pieces for $12/lb.

Biltong? Huh? - Yeah, new to me, too. Biltong is just a different way to preserve meat. It's like jerky, but air dried for many days without heat rather than with heat. It originated in southern Africa while jerky comes from South America. Now you know. Your day wasn't wasted! 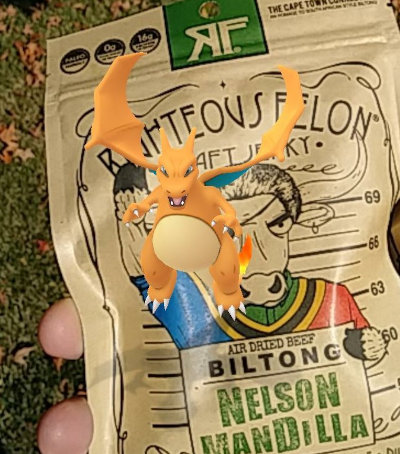